Race fans need to look no further than Ebay to get the chance to enjoy a parade lap ride with IZOD IndyCar Series drivers during the Firestone 550k pre-race festivities at Texas Motor Speedway. The online auction will benefit the Speedway Children’s Charities-Texas Chapter. Beginning on Thursday, May 20, fans can visit Ebay to bid on the opportunity to ride around during the parade laps with Dan Wheldon, Ryan Briscoe, Scott Dixon, Will Power, Milka Duno, Ryan Hunter-Reay and Sarah Fisher. The auctions concludes June 3 at 11:59 p.m.

Speedway Children’s Charities also will offer the opportunity to purchase parade laps with Danica Patrick, Helio Castroneves, Dario Franchitti, Tony Kanaan and Marco Andretti during a live auction at the Life in the Fast Lane Condo Tour and Progressive Feast on June 3 at the Lone Star Tower. A limited number of spots for the event are available at $275 for couples and $150 for individuals. To purchase, tickets contac Speedway Children’s Charities at 817- 215-8421 or visit www.scctexas.org.

Fans can visit with Danica Patrick, Helio Castroneves, Dario Franchitti and more during a IZOD IndyCar Series autograph session at NorthPark Center on Level 1 in front of Macy’s on June 3, from 6-7 p.m.

The autograph session will feature all the drivers competing in the Firestone 550k along with motorcycle daredevil Robbie Knievel, who will attempt to jump over 200 feet of City of Roanoke service vehicles for the “Kaptain Robbie Knievel: Above The Law” jump at Texas Motor Speedway. Knievel’s jump is the highlight to the pre-race festivities leading up to the Firestone 550k on June 5.

The inaugural family entertainment event will be held from noon to 5 p.m. with proceeds benefiting the Family Support Foundation For Mental Illness and Speedway Children’s Charities-Texas Chapter.

Hough, who won the dancing title with IndyCar Series superstar Helio Castroneves in 2007, will headline Family Fun Day! with a one-hour concert beginning at 3:30 p.m. on the frontstretch of the 10,994-seat dirt track. Prior to her performance, Christian singer Eric Orson will provide a 45-minute live musical set. Concert seating will be general admission.

In addition to the musical entertainment, Family Fun Day! will feature games, rides, storybook characters and food and beverage. The concourse area of the dirt track facility will have a petting zoo; bounce houses; mini-train rides; face painting; clowns; and Cinderella and Snow White characters among its family entertainment.

Tickets for Family Fun Day! are $20 for adults, $10 for children 12 and under, and free to children under 2. Parking is free. Families can make an evening of it as well as TMS plays host to Castroneves and the IndyCar Series for the Firestone 550k race. Special ticket packages for that event begin as low as $49 for a pair of frontstretch tickets.

To purchase tickets for this event or additional information, please visit www.texasmotorspeedway.com or call the Texas Motor Speedway ticket office at 817-215-8500.

IndyCar testing at Texas Motor Speedway on Friday night (May 7) will be open to the public at the Speedway Club.

IndyCar stars Ryan Briscoe, Scott Dixon, Marco Andretti and Davey Hamilton are scheduled to be on track under the lights from 6-10 p.m.

Doors open at 5 p.m. and fans can park for free in the Crystal Lot and enter the speedway through the Speedway Club main entrance. Fans have the option of taking the elevator upstairs to the eighth floor to watch testing in the Starlight while enjoying dinner, drinks and the NASCAR Nationwide Series race on TV. The Speedway Club will offer Happy Hour drink specials and a bar menu. A chef's table dinner will be available for $25.

Those who want to watch the testing action for free can do so from the grandstand by entering from the second level of the Speedway Club, just up the escalators.

TMS will not allow coolers in the facility during testing, but concessions will be available for purchase in the grandstand area. 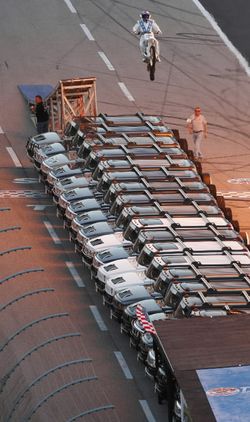 It just wouldn't be an IndyCar weekend at Texas Motor Speedway without a spectacular pre-race show.

Motorcycle daredevil Robbie Knievel is returning to TMS this summer to attempt the “Kaptain Robbie Knievel: Above The Law” jump at TMS on June 5. Knievel, the 47-year-old son of the late iconic daredevil Evel Knievel, will attempt to break his personal best by jumping more than 200 feet of City of Roanoke (Texas) service vehicles. Knievel's jump is scheduled for 6:15 p.m., approximately 90 minutes prior to the start of the Firestone 550k IndyCar race.

“We always try and provide our fans with the best pre-race entertainment available and Robbie continues to be a huge fan favorite at Texas Motor Speedway,” speedway president Eddie Gossage said in a release. “If fans thought they were going to get plenty of drama from Indy cars running side by side at 225 miles per hour, we just upped the ante on the drama with Robbie performing a death-defying jump.”

This will be Knievel’s third jump at TMS, all of which have been paired with an IndyCar Series race weekend. His first jump at the speedway came on Oct. 6, 2001, when he jumped the entire IndyCar Series starting field. Knievel returned June 7, 2008, and jumped over 21 Hummer vehicles.

Fans of Texas Motor Speedway on the social networking site Facebook will get an exclusive chance to win tickets to the upcoming WinStar World Casino 400k and Firestone 550k races.

“Firestone Fridays” begin on Friday, May 7 and will give fans an opportunity to win a pair of tickets to the Firestone 550k IndyCar Series race June 5. Get all the details at facebook.com/texasmotorspeedway.

IZOD IndyCar
Indy Grand Prix of Alabama
Site: Birmingham, Ala., Barber Motorsports Park (road course, 2.38 miles)
TV schedule: Saturday, qualifying (5 p.m., Versus); Sunday, race (2 p.m., Versus)
Race distance: 178.5 miles/75 laps
2009 winner: Inaugural race
Fast facts: Will Power won the rain-delayed Honda Grand Prix in St. Petersburg, Fla., on March 29 to sweep the first two races of the season. Barely seven months after breaking his back in a crash, the Penske Racing star held off Justin Wilson to become the first driver to win the first two events of a season since Sam Hornish in 2001. ... Power leads the season standings with 103 points. Wilson, Ryan Hunter-Reay and Dario Franchitti are tied for second, 44 points back. ... Danica Patrick was 15th in the opener in Brazil and seventh two weeks ago in St. Petersburg. ... The teams tested for two days in February at the 17-turn track.
www.indycar.com