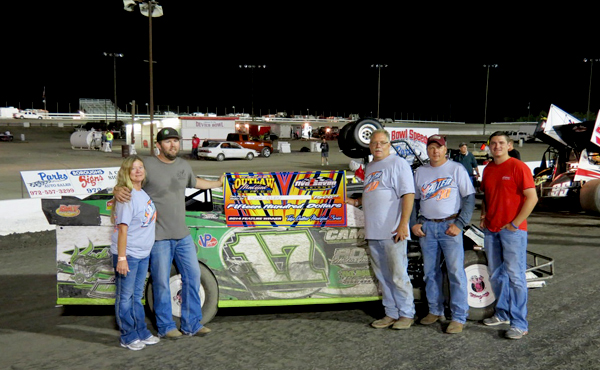 Chase Allen was the TOMS winner at the Devils Bowl Speedway.

It was the Preliminary Night at the Devils Bowl Speedways 41st Annual James McElreath Memorial Winter Nationals. The weather was beautiful and a good crowd was on hand to watch the races. Seventy-six race teams in the Blaines Motor Supply USA Limited Modifieds and the Lucas Oil ASCS Sprints attempted to lock themselves into Saturday's finale races. There were also 29 Texas Outlaw Modifieds Series (TOMS) for a total of 105 cars in the pits. Racing continues Saturday night for the ASCS Sprints, Blaine Motor Supply USA Limited Modifieds and the ASI RaceSaver 305 Sprints. 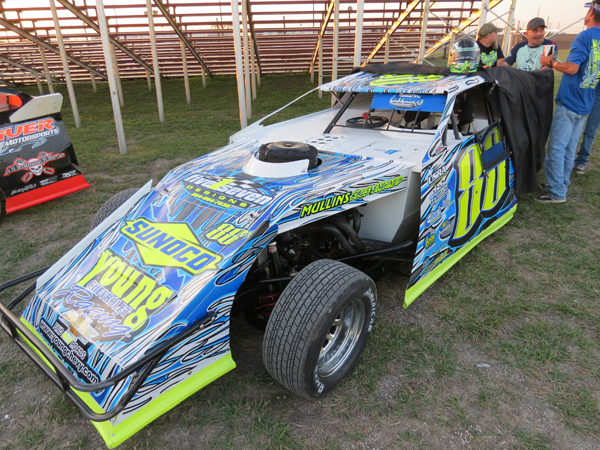 Not a good night. Dunn had a flat in his heat and a wreck in feature.

Texas Outlaw Modified Series (TOMS) Winner: In one of the best races of the evening, the 2014 Devils Bowl Speedway Modified Champion Max Eddie Thomas, No. 82, and CAM Chassis Chase Allen, No. 17, put on a great show. Max Eddie Thomas lead most of the race, but with a few laps to go, Max Eddie and Chase Allen swapped the lead back and forth. It was neck and neck on the final lap with Chase Allen edging out Max Eddie Thomas at the finish line for the win. On lap seven, eight cars were involved in a major wreck on the front straight-a-way that included current TOMS points leader Clyde Dunn Jr., No. 88. Twenty-three Modifieds started the feature, eleven finished. Chase Allen, No. 17, was first, Max Eddie Thomas, No. 82, was second, Colby Smith, No. 01, was third, Kyle Sweeney, No. 21k, was fourth and Wesley Veal, No. 11x, was fifth. Cody Smith, No. 18s, Danny Veal, No. 5x, Josh Landers, No. 14x, Doug Byrns, No. 32, and Austin Theiss, No. 7d, round out the top ten. 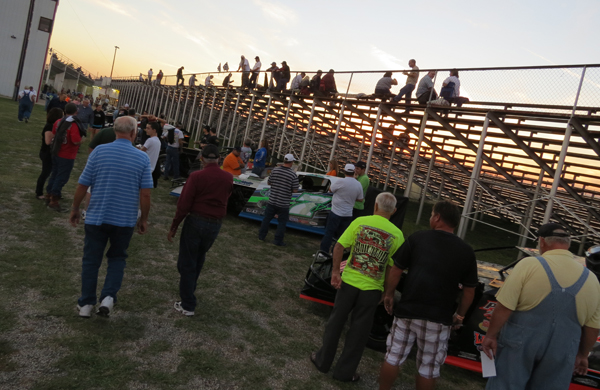 The race fans enjoyed meeting the TOMS drivers and getting an autographed pic. 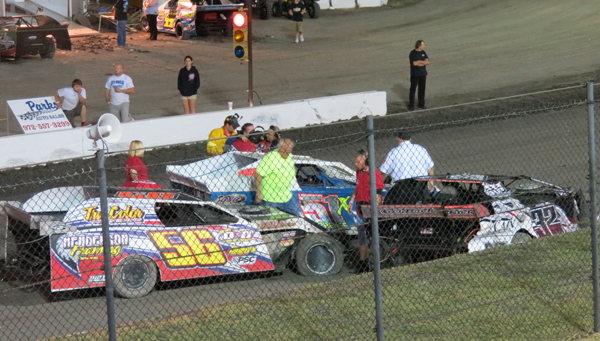 Several Modifieds were involved in a wreck during the feature including Troy Taylor. 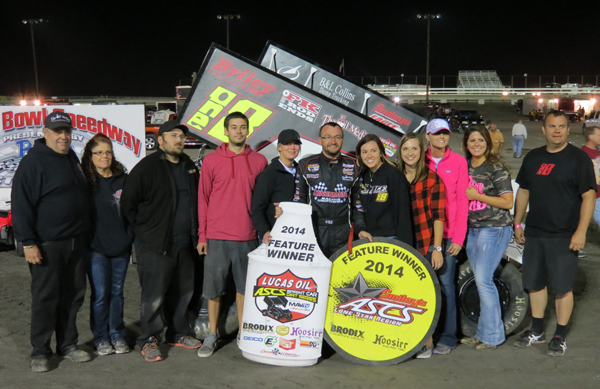 ASCS Sprints Qualifiers: Jason Johnson, No. 41, looked to be well on his way to getting his first ASCS National feature win this season. But with four laps to go, Jason experienced drive line problems ending his night. Tony Bruce Jr., No. 18, took over the lead and the top spot. Dusty Zomer, No. 82, had a good run to finish second, Matt Covington, No. 95, was third, and Aaron Reutzel, No. 87, rounded out the top four positions that are locked into Saturday's feature. Brad Loyet, No. 05, Jeff Swindell, No. 94, Sam Hafertepe Jr., No. 15h, Johnny Herrera, No. 45x, Jack Dover, No. 53, and Wayne Johnson, No. 77x, round out the top ten. 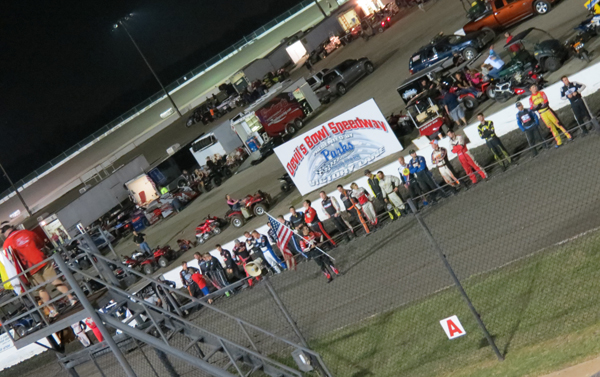 Close to fifty ASCS Sprints were in the pits. 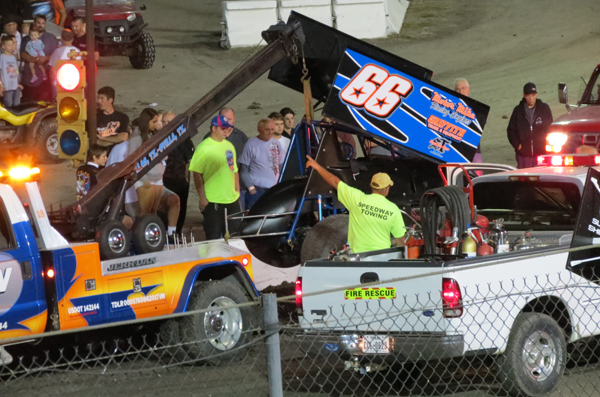 J.J. Simmons hit the wall hard during the feature. Jason Johnson was checked out after his Sprint experienced drive line problems.

To view a video of the ASCS Sprint feature, click below: 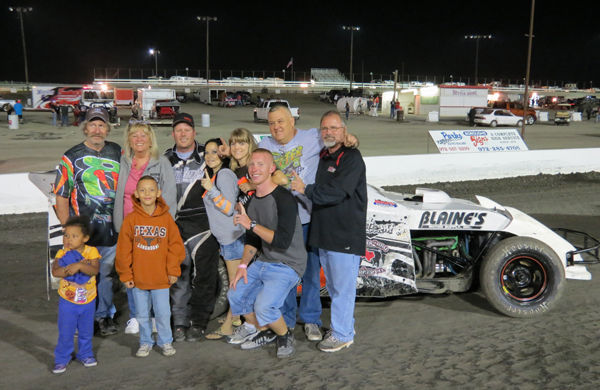 Blaines Motor Supply USA Limited Modifieds Qualifiers: Robert V8 Vetter took the top qualifying spot. Steven Hardy, No. 15, was second, Steve Nabors, No. 23, was third, Michael Daniels, No. 711, was fourth, Tommy Davis Jr., No. 17, was fifth, Jimmy Staats, No. 39, was sixth, and Tom Lorenz, No. 84, was seventh. These sevens cars are locked into Saturday's finale.

To view a video of the USA Limited Modified qualifier, click below: 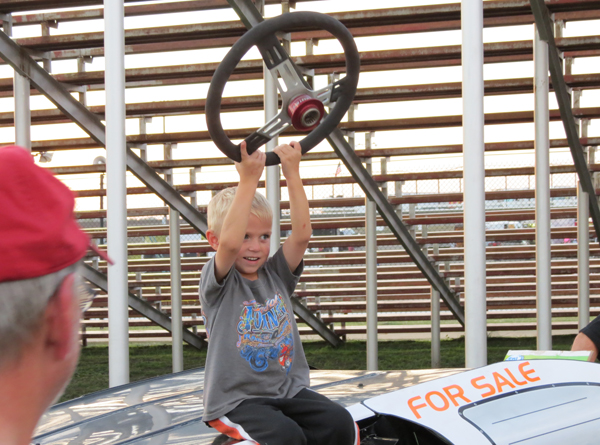 Car was for sale. Future wheel man not included. 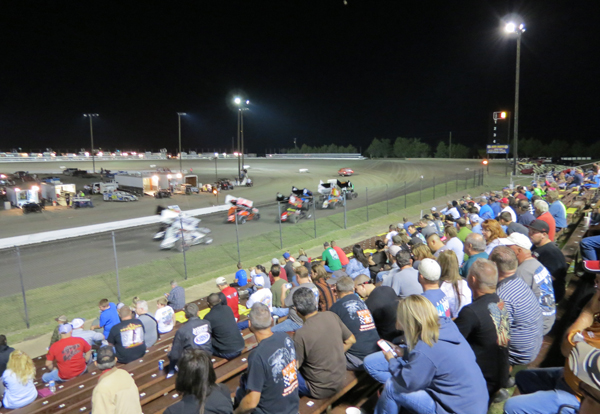 The weather was great for a night at the races.

For OFFICIAL results and more information on the Devils Bowl Speedway, go to: www.devilsbowlspeedway.com

To view some photos from the Devils Bowl Speedway, click below: