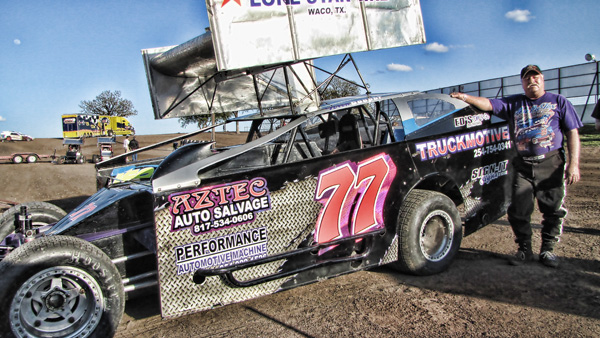 Nick Cooper, driving the Lone Star Tire #77, from Alvarado, TX, won the first Texas Wing Modified Association race at Cowtown Speedway this season. Rick Poteet, #61, led most of the race, but with a few laps to go, Nick passed him for the win. For more information on the Wing Modifieds, go to: www.ihwma.com

In the Modified feature, Bobby Ruffin, #121, won a hard fought race. Rod Slack, #05r, started on the poll, but dropped out with mechanical problems opening the door for Ruffin. Chase Allen, #30, was second and Glen Hibbard, #127, was third. The Modifieds will return to Cowtown Speedway next week to compete for the $1,000 feature win and $100 to start. 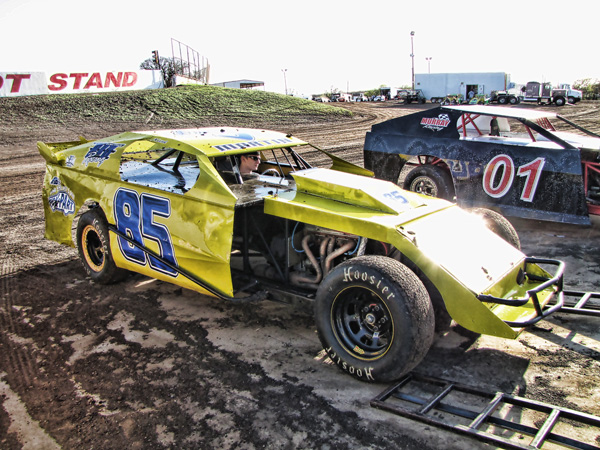 In the Performance Transmission raceTX.com Limited Modified feature, Keith Martin, #85, continued his winning ways. Starting on the outside front row, Keith took the lead and never looked back. The win gives him 112 points for the season. Nick Clinkenbeard, #66, came in second and Andy Wejtaszczyk, #47, was third. 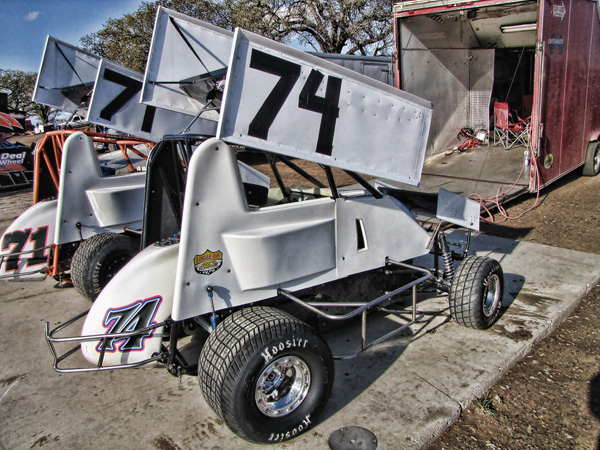 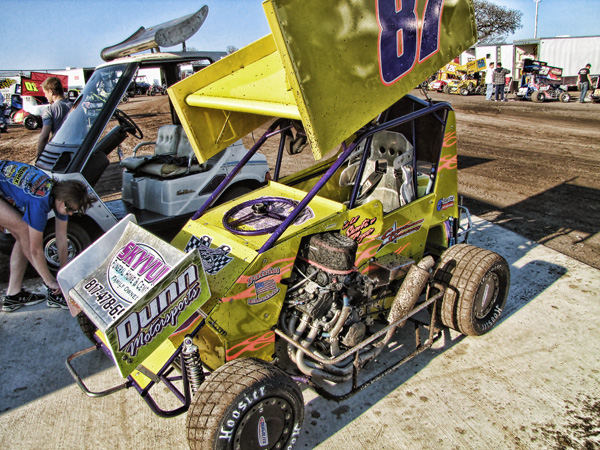 Ashley Reagan, #87, also continued her winning ways with her win in the Restrictor Mini Sprint feature. Starting from the pole position, Ashley held on to the lead for another feature win. Garron Brimmer, #3g, took second and Payton Williams, #22, was third.

It looked like the Smithermans might win another Bomber feature, but when the dust had settled, John Roan, #76, took the checkered flag. Chad Pearce, #82, was second and Randy Ohavier, #16, was third.

For official results and more information, go to: www.cowtownspeedway.com

To purchase a video of all the racing action, contact Michael at: www.thrillerproductions.com

To view some highlights from Saturday's races, click on the video below:

NASCAR Sprint Cup
Goody’s Fast Pain Relief 500
Site: Martinsville (Va.) Speedway (oval, 0.526 miles)
TV schedule: Friday, practice (11 a.m., Speed), qualifying (2 p.m., Speed); Saturday, practices (9:30 a.m. and 10:50 a.m., Speed); Sunday, race (noon, Fox)
Race distance: 263 miles/500 laps
2009 winner: Jimmie Johnson
Fast facts: The race marks the switch to the traditional spoiler from the rear wing that was introduced in 2007. NASCAR decided during the off-season to go back to the spoiler, partly in a hope that it improves competition. Martinsville was the earliest the change could be made because of the planning needed for such a technical change. ... Jimmie Johnson has won five of the last seven races at the track and six of the last 11. He has 50 Cup victories to tie Ned Jarrett and Junior Johnson for 10th place on the career list. ... Denny Hamlin won the 2008 spring race and 2009 fall event at Martinsville. ... Kevin Harvick leads the series standings with 774 points, one more than Matt Kenseth. Johnson is third, 14 points behind Harvick. ... Richard Petty won a record 15 Cup races at the track, four more than Darrell Waltrip. Jeff Gordon leads active drivers with seven Martinsville victories.
www.nascar.com 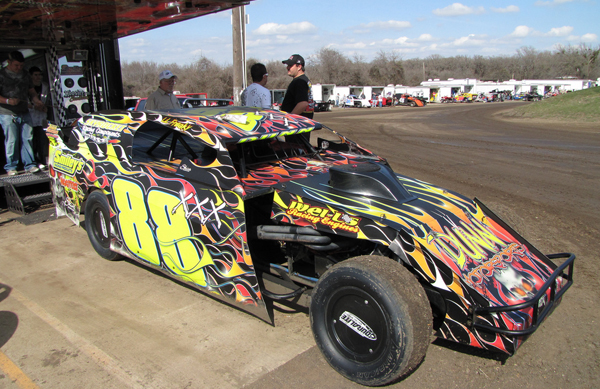 From Darin Short out at Cowtown Speedway

With more pleasant spring-like weather conditions in the 70s forecast to return to the D/FW area this week, Cowtown Speedway in Kennedale is set to resume its 2010 racing season with a full night of high-speed racing capped off with a $1,000 to win Demo Derby on Saturday, March 27. 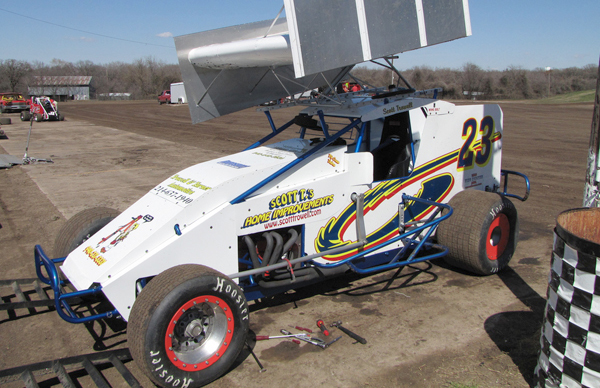 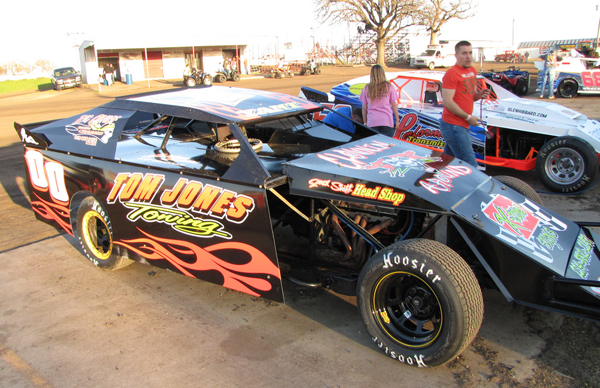 Then, the first Cowtown Demo Derby of 2010 will take place on the front stretch and the last driver able to withstand the bone-jarring crunches and crashes will receive $1,000. Second place will receive $500 and third will pay $200. Demo Derby rules are posted at the track website.

The new 2010, 40-page, racing program will also be available to fans for purchase at the souvenir stand.

For more information, go to: www.cowtownspeedway.com

To view some exciting Modified highlights from three weeks ago, click on the video below: 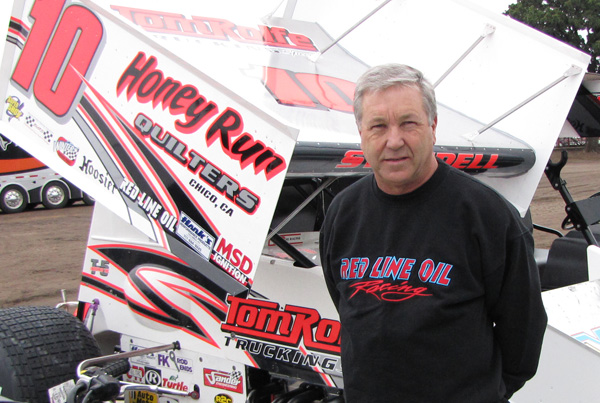 Tennessee's Sammy Swindell, driving the J&D/Swindell Motorsports #10, won the Lucas Oil ASCS Sprints 30-lap feature and the $6,000 prize at the 37th Annual Spring Nationals. Due to bad weather, today's races have been cancelled. Over 60 Sprints were in the pits for the Lucas Oil ASCS Series sponsored by K&N Filters. Sean McClelland started on the pole. About a half-a-dozen laps into the race, Swindell took the lead and never let up. Brady Bacon, #99, and Wayne Johnson, #c41, battled it out for the second and third place positions with Johnson eventually coming in second. Danny Wood, #94, was fourth and Tony Bruce Jr., #18, was fifth.

The next Lucas Oil ASCS Series race in this area is at the Lone Star Speedway in Kilgore, TX, Friday, April 9. The Series then moves on to Little Rock's I-30 Speedway the following night.

For more information on the Lucas Oil ASCS Series and results, go to: www.ascsracing.com