Some ASCS2 600 Sprints in action at Cowtown Speedway.

Several drivers made final adjustments to their race cars at Cowtown Speedway before next weeks big show on the 1/4 mile fast track. The 2nd Annual Cowtown Midget Championships, sponsored by City Vending, National Health Care Advisors and Sunco Race Fuels, is scheduled for March 5-6 and is offering a $60,000 weekend purse. Over 30 Mighty Midgets have pre-registered and will be competing for the $1,000 to win Friday and $3,000 to win Saturday.

The popular "Fan Fest" will be held Saturday between noon and 1:15 pm. Race fans that have a ticket for that days race will be able to go into the pits and meet the drivers, get autographs and take pictures.

For the latest information on the 2nd Annual Cowtown Midget Championships, go to: www.cowtownspeedway.com

To view some photos of the race cars, click on the slide-show below:

To view a video of Cowtown's Practice, click on the video below:

Dirt track drivers from across the nation, along with a strong D/FW Metroplex contingent, will gather at the Texas Motor Speedway Dirt Track this weekend (Feb. 26-27) for the Texas World Dirt Track Championship.

Also among the field is 2010 Texas Motorsports Hall of Fame Lanny Edwards Award winner Tom Lorenz of Mesquite. The award, presented by Texas Motor Speedway and Edwards, honors individuals who demonstrate perseverance and improvement in short-track racing for competitors and fans. Lorenz, president of Smiley’s Racing Products and Hoosier Tire Southwest, is a familiar face around the dirt track scene and earns this year’s Lanny Edwards Award for his contributions to grass roots racing.

Texas Motor Speedway Media Day, scheduled for Monday, March 1, will be available free to fans via USTREAM and all they need to do is head to www.texasmotorspeedway.com to locate the link for the 60-minute show that will begin at approximately 11:30 a.m. CT.

In addition to those sessions, Gossage also will be making some major announcements regarding the IZOD IndyCar Series race in June and the NASCAR Sprint Cup Series event in November.

From Darin Short out at Cowtown Speedway:

After an historic snow event in the Fort Worth area put the kibosh on the weekend racing at Cowtown Speedway on Feb. 12-13, a new replacement date is now in place. The entire Second Annual City Vending Cowtown Midget Championships presented by National Health Care Advisors and Sunoco Race Fuels, Fast 50 for Modifieds and all three ASCS2 series events will be run on March 5-6. The midgets are sanctioned by SMRS/USAC, the modifieds are sanctioned by NCRA and all three divisions of 600s are sanctioned by ASCS2.

So far 177 drivers from 11 states have entered the event. For those teams returning in March, they are still entered and there is nothing additional those teams need to do. If you are one of those teams that cannot return on March 5-6, e-mail cowtownspeedway@yahoo.com with your intent to withdraw from the event by Feb. 28. New entries will be accepted at the track Web site, and registration is up and running.

To those fans that had purchased advanced two-day passes, the same applies. If you are coming March 5-6, then there is nothing further you need to do. If you cannot make it, please e-mail cowtownspeedway@yahoo.com by Feb. 28.

This schedule change will also force the postponement of the 2010 Cowtown Go Kart opener that was set for March 5, and the Cowtown Speedway points opener on March 6. The points season for both of the Friday night Go-Karts and the Saturday night classes will kick off the following weekend, March 12-13. For more information, go to: www.cowtownspeedway.com 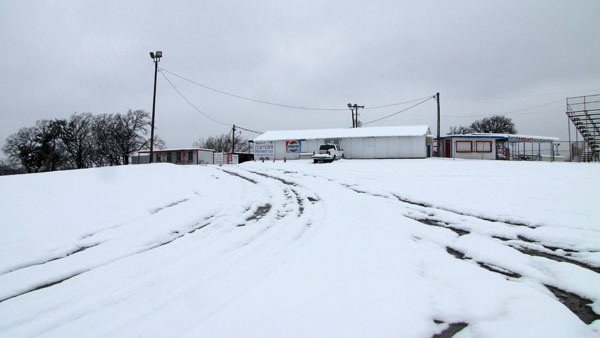 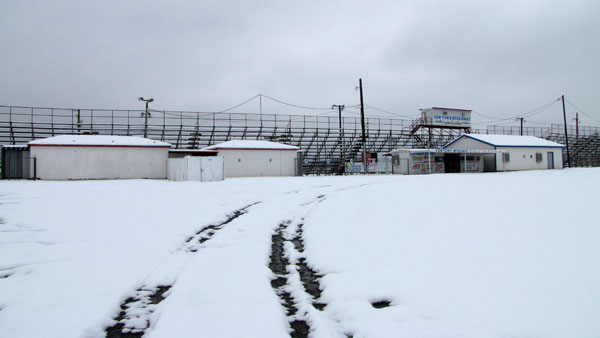 Cowtown Speedway was a winter wonderland.

From Darin Short out at Cowtown Speedway:

Twenty-four hours ago, “1 to 3 inches of snow” was predicted for the DFW area, and Cowtown Speedway was prepared to accommodate by shuffling the weekend schedule to Saturday and Sunday, Feb. 13-14. But the reality turned into an all-time DFW record 24-hour snowfall total – in excess of 11 inches.

So, instead of fighting Mother Nature on Valentine’s Day weekend, Cowtown Speedway is rescheduling and moving the entire Cowtown Midget Championships, Fast 50 and ASCS2 series events ahead three weeks, to the first weekend in March. The exact weekend schedule will be announced early next week.

Track promoter Bo Rawdon comments: “We have equipment to move the snow, but many of our teams and fans don’t and can’t even get out of their driveway, so in the interest of safety, we’ll just postpone this event and hopefully the next all-time record weather event won’t happen on that weekend too.”

A field of 177 drivers from 11 states have entered the event in advance. For those teams returning in March, they are still entered and there is nothing additional those teams need to do. If you are one of those teams that cannot return the first weekend in March, simply e-mail cowtownspeedway@yahoo.com with your intent to withdraw from the event by Feb. 28. New entries will be accepted at the track Web site, and registration is up and running.

To those fans that purchased advanced two-day passes, the same applies. If you are coming the first weekend in March, then there is nothing further you need to do. If you cannot make it, please e-mail cowtownspeedway@yahoo.com by Feb. 28.

Again, no one predicted a ‘historic’ weather event in the DFW area, but now that it has happened, we’ll clean up the mess and try it again in March. Click www.cowtownspeedway.com  for the latest in event news.

NASCAR Nationwide Series
Drive4COPD 300
Site: Daytona Beach. Fla., Daytona International Speedway (tri-oval, 2.5 miles)
TV schedule: Today, practice (10:30 a.m., ESPN2); Friday, qualifying (2 p.m., ESPN2); Saturday, race (11 a.m., ESPN2)
Race distance: 300 miles/120 laps
2009 winner: Tony Stewart
Fast facts: Danica Patrick is making her NASCAR debut, driving the No. 7 Chevrolet for JR Motorsports. In her stock car debut Saturday, the IndyCar star was sixth in the Daytona ARCA race. She’s set to run 13 Nationwide races this year. ... Kyle Busch won the series championship last year for Joe Gibbs Racing, unifying the driver and owner titles for the first time since 2006. Busch won nine times and had 11 second-place finishes last season. He has 30 wins in 173 Nationwide starts. ... Chrissy Wallace is attempting to join father Mike, uncle Kenny and cousin Steve in the field. If she qualifies, it will mark the first time that a father and daughter have raced together in the series. They broke that barrier in the Trucks series last year at Talladega. It also would be the first time four members of the Wallace family have competed in a NASCAR national series event. ... Clint Bowyer won the July race at Daytona.
www.nascar.com