Cash, Cars, Crashes and Can Goods at Cowtown 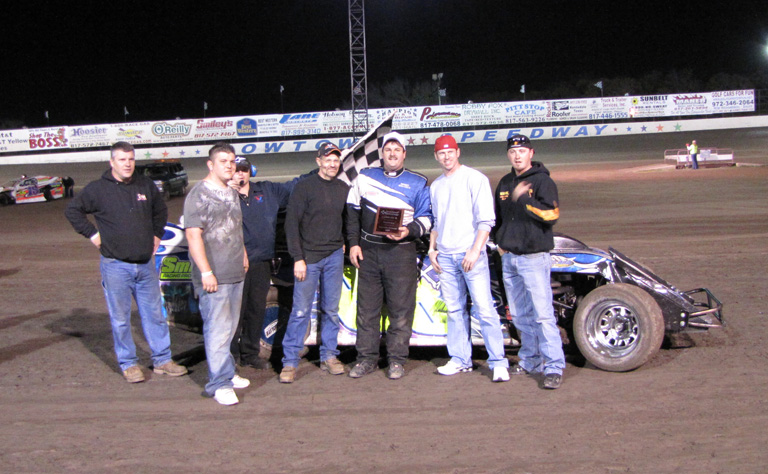 Race fans have alot to be thankful for. At Cowtown Speedway's "Gobbler 90", those who made a canned goods donation not only got $3 off an adult admission, but also helped feed those in need. The "Gobbler 90" featured three 30-lap $1,000 to win, $100 to start feature races in the Modified, Limited Modified and 600 Non-Wing Mini Sprints.

On the first lap of the Modified feature several cars were involved in a major wreck that destroyed Chase Glick's #02 Modified. Chase was not injured. See photos and video below.

Bobby Malcus was the winner in the Modified feature. Bobby defeated Jared Webb for the $1,000 feature win. There were 24 cars in the feature and nine cars finished.

Trevor Lane was the winner in the Limited Modified feature. Trevor defeated Danny Ferguson for the $1,000 feature win.

Hunter Jones was the winner in the 600 Non-Wing Mini Sprints feature. Hunter defeated Caleb Martin for the $1,000 feature win.

Harvesting International Ministry Center in Mansfield was there to collect the canned goods donations. Help them Stomp Out Hunger. If you would like to make a donation or know more about the ministry, go to: www.himcenter.org 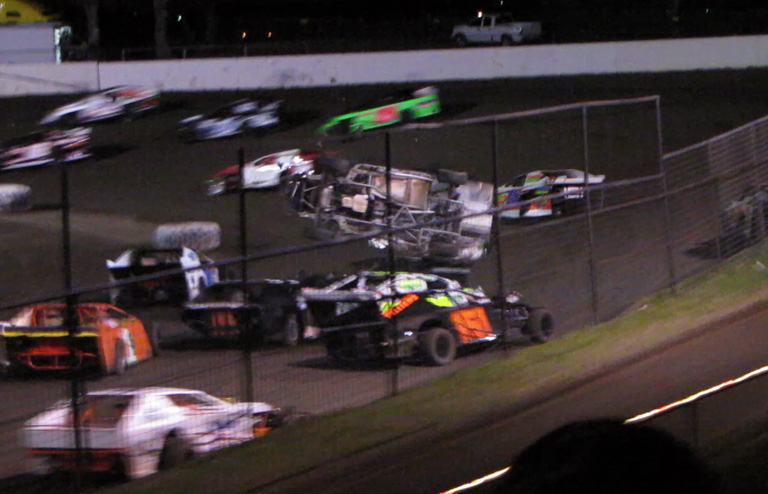 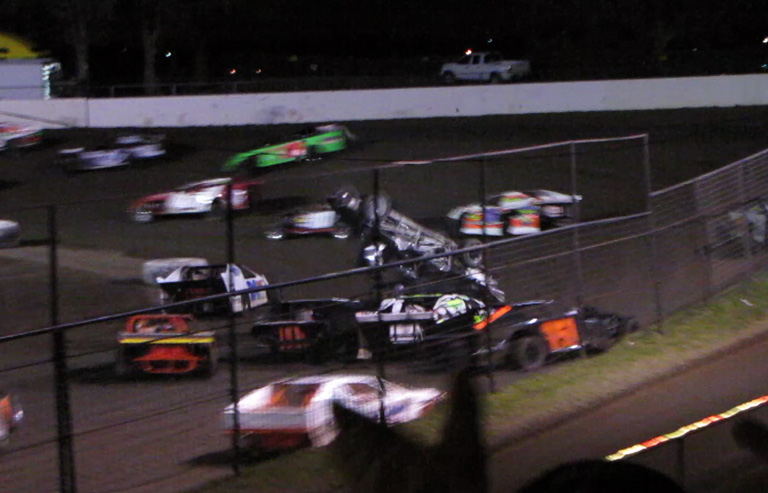 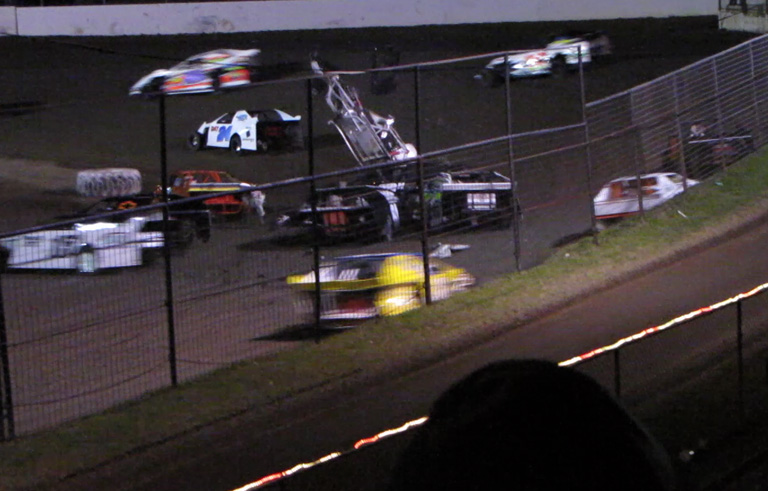 Chase Glick's Modified wreck. To view a video of the wreck, click on the video below. 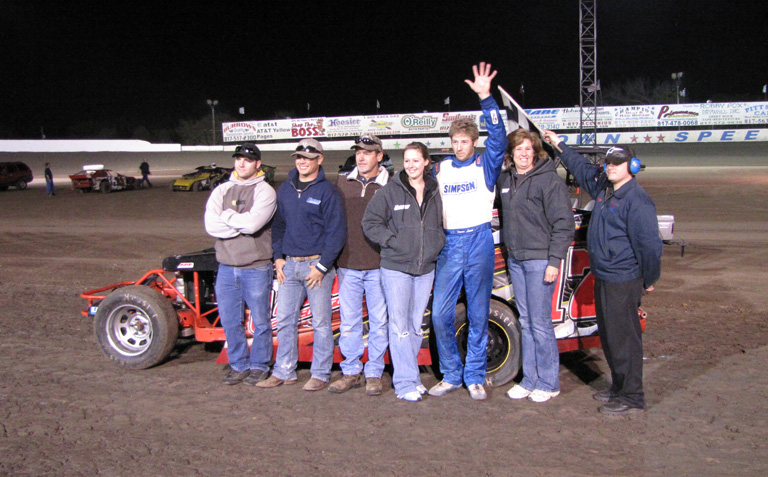 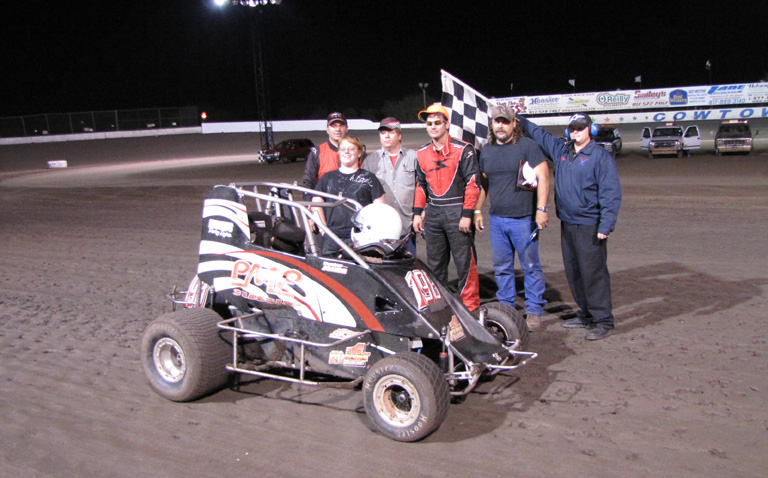 For more information and results, go to: www.cowtownspeedway.com

To view some photographs of the race cars, click on the slide-show below.

To view a video of the races, including Chase Glick's wreck, click on the video below. 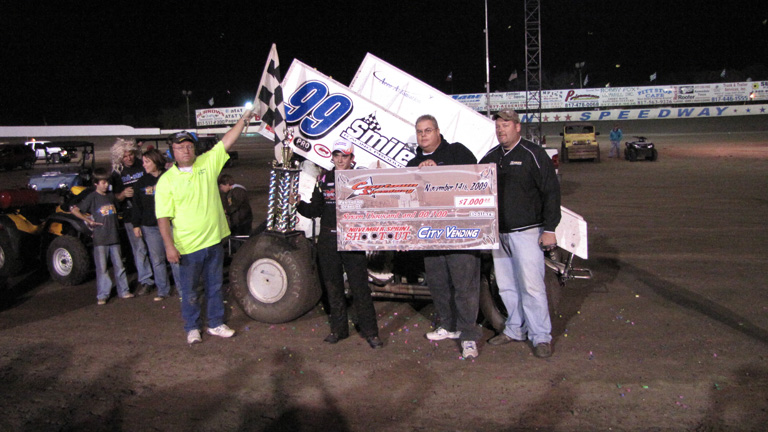 The races were delayed due to a junction box going out that left the track in the dark. The box was repaired and since the races started earlier than usual, Cowtown was able to complete the program.

For more results and information go to: www.cowtownspeedway.com 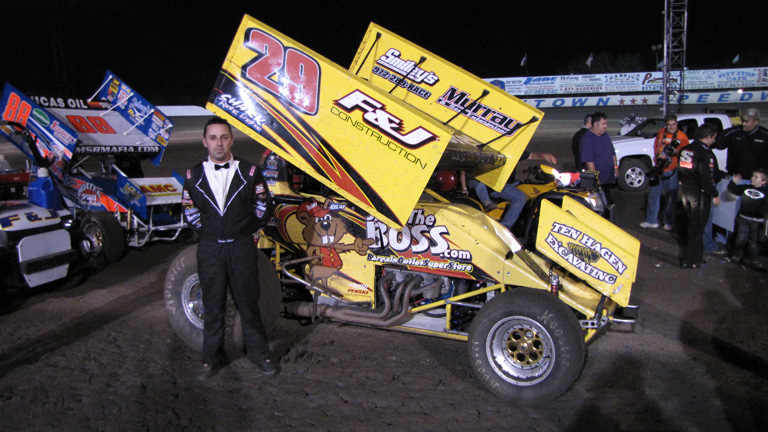 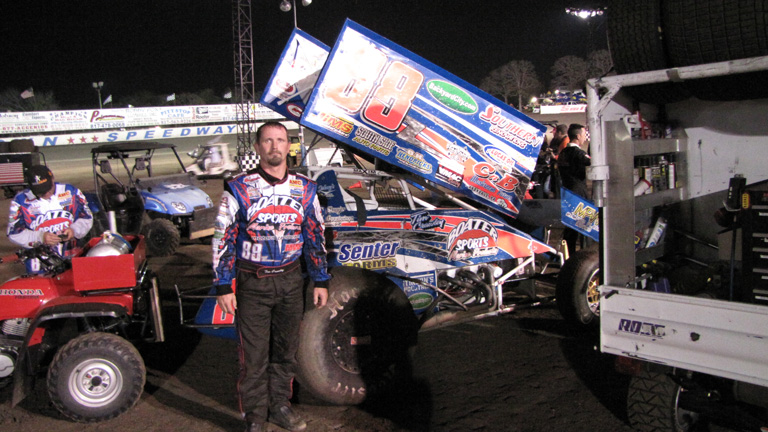 Tim Crawley was third in the NSS. 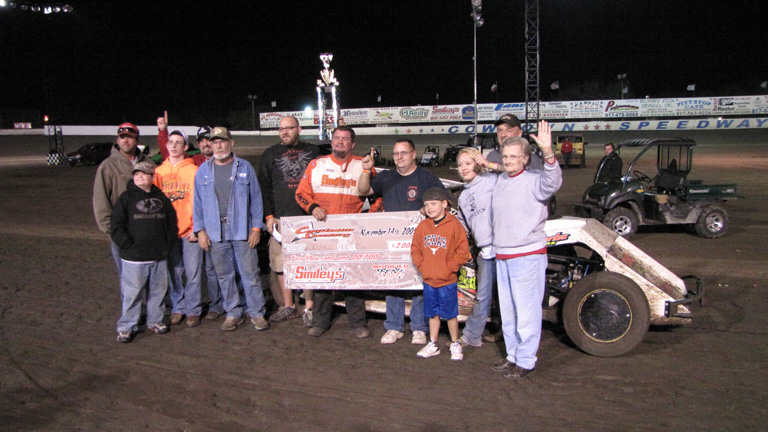 To view some photographs taken Saturday, click on the slide show below.

To view a video of Saturday's Sprint races, including Gary Wright's wreck, click on the video below.

To view a video of Saturday's Modified feature race, click on the video below.

To view a video of Saturday's ASCS2 Non Wing feature race, click on the video below.

Just when you thought the local dirt-track scene had finished for the season, Cowtown Speedway in Kennedale has scheduled an event that will offer great racing action and an opportunity for fans to give back to the community through a holiday food drive.

Grandstand tickets for adults are $15. However, fans who bring a canned-food item will receive $3 off the adult price. Kids tickets are $2 and youth tickets are $5. The food drive will be facilitated by the Harvesting International Ministry Center of Mansfield. Please visit www.HIMcenter.org for more information about their charitable organization. 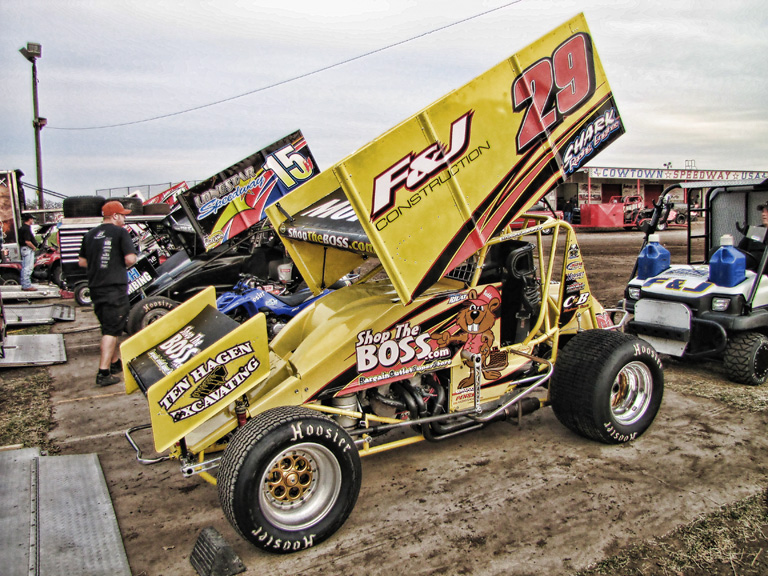 The 3rd Annual City Vending November Sprint Shootout completed the second of three days of racing last night. There were over 220 race cars in the pits. Forty-two of them were Sprints. The Sprints raced in four heat races to determine their positions in two qualifier races.

The top three Sprints from each 25-lap qualifier will be locked into Saturday's Sprint feature that will pay $7,000 to the winner. There were 21 cars in the first qualifier. ShopTheBOSS.com Travis Rilat won the first qualifier. Tony Bruce was second and Eric Baldaccini was third. In the second qualifier, Wayne Johnson defeated 18 Sprints to take the checkered flag. Tim Crawley was second and Brady Bacon was third.

For complete results and information go to: www.cowtownspeedway.com 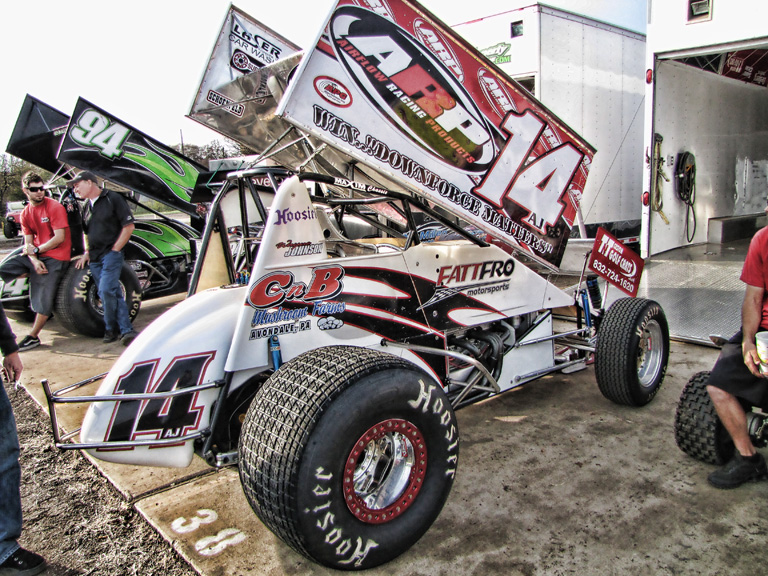 To view more photographs taken Friday of the race cars, click on the slide-show below.

To view a video of Friday's races, click on video below. 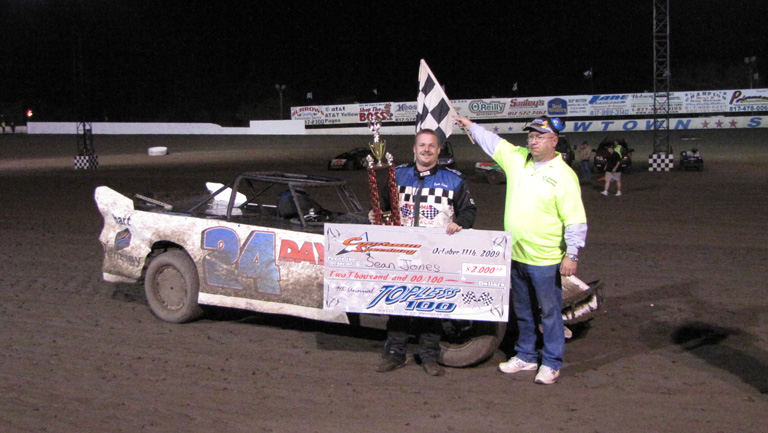 Sean Jones took the checkered flag in both the Topless 100 Modifieds and the Limited Modifieds races last night at Cowtown Speedway's Fan Appreciation Night. Race fans were admitted to the grandstands for free to see three races, plus two qualifiers, that were rained out at the Cowtown Sprint National's Show. This was the first of three nights of racing at the 3rd Annual City Vending November Sprint Shootout.

For more information on Friday and Saturday's racing program, go to: www.cowtownspeedway.com 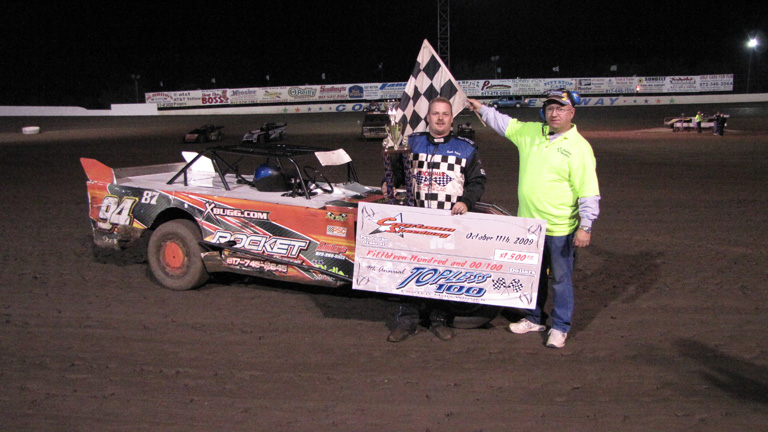 To view more photographs taken Thursday of the race cars, click on the slide-show below.


To view a video of Thursday's races, click on video below.

Local motorsports fans will be treated to some free racing Thursday as Cowtown Speedway in Kennedale opens its doors for "Fan Appreciation Night at the Topless 100".

When rainy weather canceled part of the action for the big Cowtown Sprint Nationals in early October, the track decided to finish the Topless 100 portion of the event this week as a prelude to the third annual $86,000 November Sprint Shootout on Friday and Saturday.

Thursday's grandstand admission is free for all age groups, regardless if you were in the grandstands for the rained-out races on Oct. 11 or not.

Pit gates will open at 5 p.m. Thursday and grandstands will open at 6 p.m. Hot laps will be at 6:30 p.m. and races are scheduled for 7 p.m. Those who purchased reserved seats for Oct. 11 will still have access to the reserved section from Thursday's races.

For Friday and Saturday's $86,000 November Sprint Shootout, fans can save $10 through Thursday on weekend passes by visiting www.CowtownSpeedway.com and then clicking the 'tickets' link for more info. Two-day adult passes are $35.

As of Tuesday there were more than 180 drivers entered for the five race divisions from as far away as California and Iowa. Fans can once again expect more than 200 cars by race night on Friday. 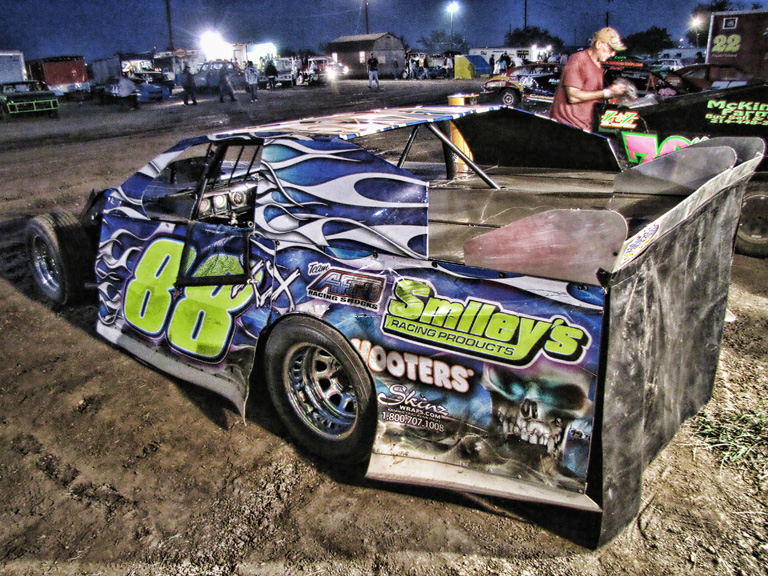 For more information and results go to: www.gpspeedway.com

To view more photographs taken Saturday of the race cars, click on the slide-show below.

To view a video of Saturday's races, click on video below.