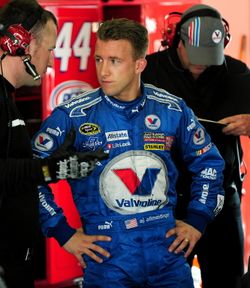 The annual NASCAR Sprint Cup All-Star race is set for Saturday (May 16) at Lowe's Motor Speedway, and 18 drivers -- past All-Star race winners, Cup points-race winners in the past year and Cup champions from the past decade -- are locked into the main-event field.

More than 20 other drivers are hoping to earn a spot in the race via at first- or second-place finish the undercard Sprint Showdown or a fan vote.

Several drivers are taking extra measures to get fans to vote for them. AJ Allmendinger, who raced his way into the All-Star main event last year by winning the Showdown, gave away pizzas and "Vote for AJ" t-shirts at Talladega last month and his wife, Lynne, and yellow lab, Misty, have been seen around the infield wearing "Vote 4 my hubby/daddy" t-shirts. Allmendinger, above, even has his friend David Reutimann, another driver needing fan votes, sporting a “Vote for AJ” shirt.

“Giving away the shirts and Hunt Brothers pizzas have been a lot of fun but the best moment so far is giving David Reutimann one of my “Vote for AJ” shirts," Allmendinger said in a team release this week. "There’s a secret a lot of you don't know. Reutimann has a lot of my merchandise in his motorhome closet. I’m serious, he has a real man crush on me. He wears me out for hats all the time. I’m not trying to stir anything up, but I think his wife and kids are going to vote for me!  Can’t wait til he sees this quote in the paper.” 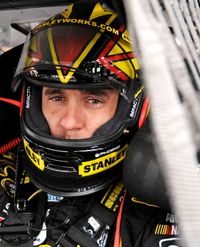 Two of Allmendinger's teammates at Richard Petty Motorsports have taken their fan vote bid in a more charitable direction. Reed Sorenson said he'll donate his race winnings to Ronald McDonald House Charities if he transfers into the race through the fan vote. RPM driver Elliott Sadler, left, said he'll rent and set up a dunk booth outside of Lowe's Motor Speedway in Concord, N.C., prior to the Coca-Cola 600 on May 24. Sadler himself will man the booth for one hour and donate and proceeds raised in that one hour to Speedway Children’s Charities.

“Race fans should vote Elliott Sadler into the All-Star Race because I’m a good race car driver, I like to have fun with the fans and I’m the best looking driver out there. I’m just goofing around … kinda," Sadler said in a team release. "But honestly, I think it would be a great honor to represent the race fans in the All-Star Race."

Allmendinger appreciates his teammates' gestures, but he still wants your vote.

“The fans just have to vote for me," Allmendinger said. "I know there are guys who are going to do funny stuff or donate money to a great cause. But I have a wife and dog to support and I desperately need to get voted into the race. Elliott is using a dunking tank, Reed is donating his prize money, (Joey) Logano has a big corporate sponsor behind him. I’m kind of a charity case. If you vote for me you will be helping out mankind. Yes, I’m begging.”

Go here to vote for Allmendinger, Sadler or Sorenson or another driver.

Straight off the NASCAR press release:

All three were found to have violated Sections 12-1 (actions detrimental to stock car racing) and 7-5 (violation of the NASCAR substance abuse policy) of the 2009 NASCAR rule book.

Approximately 100 West Coast off-road racers will make their way to Fort Worth on May 15-16 for the Traxxas TORC (The Off-Road Championship) Series season opener at the Texas Motor Speedway Dirt Track.

The Traxxas TORC Series branched off of CORR (Championship Off-Road Racing), which was a series that visited the TMS Dirt Track in 2007. The newly developed TORC series, sanctioned under the United States Auto Club, combines CORR’s off-road competition with other various racing entities across the U.S., utilizing short tracks and larger outdoor motocross-inspired courses.

Daily tickets for the Traxxas TORC Series event are $35 for adults, $10 for children ages 10-15 and free for children ages nine and under. In addition, family 5-packs are available for $75. Tickets can be purchased by calling 817-215-8500 or visiting www.texasmotorspeedway.com. 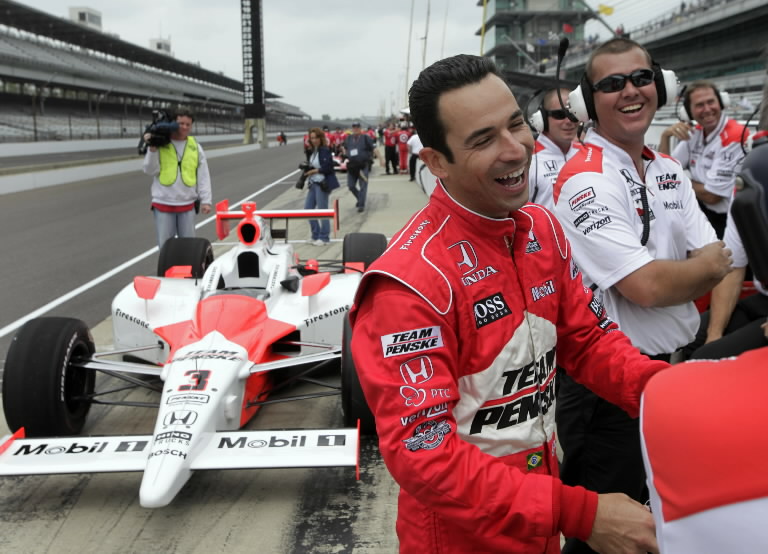 IndyCar Series star and 2009 Indianapolis 500 pole winner Helio Castroneves is scheduled to be in Dallas on Monday to cook with renowned chef Stephan Pyles. In honor of Castroneves' visit to north Texas, Texas Motor Speedway is serving up "Helio's Blue Plate Special" ticket promotion for the upcoming Bombardier Learjet 550k.

Castroneves' top starting spot for the Indy 500 means TMS will be offering 300 $1 frontstretch tickets for the June 6 Bombardier Learjet 550k at TMS. The ticket offer will be available beginning at 9 a.m. (Central) on Tuesday (May 12). Tickets from the promotion can only be purchased by calling 817-215-8500 or by visiting the TMS ticket office in person.

Drive your car/truck on the track at Texas Motor Speedway

Motorsports fans will get the opportunity to drive their own car or truck on the Texas Motor Speedway high-banked, 1.5-mile quadoval on Saturday (May 9). The event, which benefits Speedway Children's Charities, is scheduled for 5-10 p.m.

For a $30 donation, fans can drive their vehicle behind a pace vehicle for three laps. For an extra $10 donation, fans can have their picture taken in Victory Lane. Laps will be conducted for car clubs (by reservation) from 5-7 p.m. and the general public from 7-10 p.m.

It could take nice weather and motivated NASCAR fans to continue a string of sellouts at Darlington.

Darlington Raceway spokesman Jake Harris said in an e-mail Thursday there were fewer than 5,000 seats available for Saturday night's Southern 500. Darlington leaders are hopeful they can sell out their fifth straight Mother's Day weekend race. Darlington seats about 62,000.

The track had gone several races without selling out until 2005, when it first began holding a Saturday race under its newly installed lights. Darlington has sold out each season since.

In January, Darlington officials cut prices on some tickets by $10. The track also recently announced price cuts at concessions for the upcoming race.

This weekend's local racing schedule (May 8-10)

Fort Worth area tracks and dragways. If the forecast calls for inclement weather, check the track Web sites or call the track to make sure the racing is still on schedule: