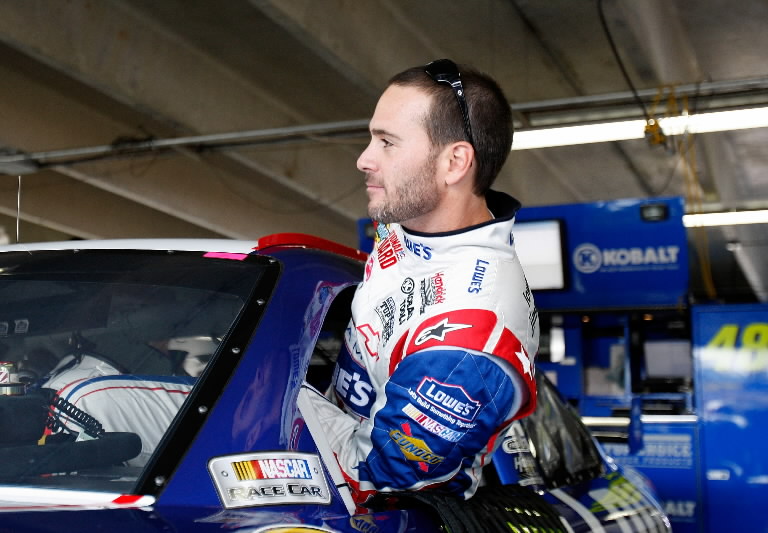 NASCAR Sprint Cup champ Jimmie Johnson returned to Lowe's Motor Speedway this week with a new short, short haircut. He revealed in a press conference on Tuesday the story behind the new 'do.

Q: Did you buzz your hair on a bet?

JIMMIE JOHNSON:  It wasn't necessarily a bet.  I was at a friend's house for a barbecue on Sunday.  And his kids thought – there was a bunch of neighborhood kids – they thought it would be a great idea to shave our heads.  And one of the fathers agreed to do it. Then once he pulled it off, he started harassing me to shave my head and the kids were there and they wanted to do it so bad.  And I let them shave my head.  So it was funny.  Got some great photos and the kids all had a great laugh.  Kids like four years old up to seven or eight. And what the heck, it will grow back.  It will take a couple of weeks and it will be back to where it was.

Q: Did you laugh about it later?

JIMMIE JOHNSON:  I did, when I first knelt down, my friend's daughter had the clippers, and I didn't think she was really going to go after me that quick, and she got my forehead and took a big chunk out and I stood up and looked in the mirror and I said I've got to do it now because I'm missing my bangs.  So I let them do it.  And it was just a fun moment. My wife, she couldn't look at me for like 10 minutes.  She was laughing.  And once I get some sun on my scalp I think it will look a lot better.  It's a little white and bright now.


On Friday, Johnson talked more about his hair, or lack of it:

... And the aero package, for my head, there was seven kids that thought it would be a great idea to shave my head and I am a kid at heart and decided to let them do it.  My wife ran out of the room immediately and wasn’t sure I was going to go through with it.  I walked out and showed it to her so what heck, it will grow back. It's not a big deal.”

Q:  What did you wife think about it?

JJ:  I don’t know.  She stood there for a few minutes with her hands over her mouth and just stared at me and I don’t think that is a good response.  But she is getting used to it and I think I am too. The first couple times that I walked by the mirror the following day I was like, damn, that’s much different than what I’ve ever seen before.  So, what the heck.