Johnson's boo-boo won't keep him out of Daytona 500 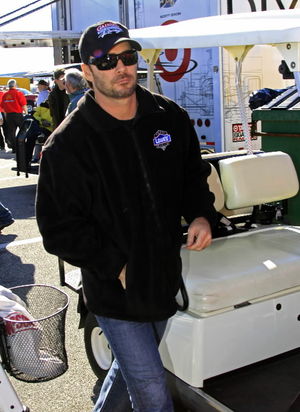 And you thought you were clumsy. From the Associated Press:

Three-time reigning NASCAR Sprint Cup champion Jimmie Johnson, right, underwent surgery to repair a tendon and nerve after cutting his left middle finger with a kitchen knifeSunday, while preparing to compete in the final segment of the Rolex 24 sports car race.
A statement released by Johnson on Monday said the injury occurred above the knuckle and happened while the Hendrick Motorsports driver was attempting to cut a small hole in his firesuit in order to feed a tube from a cooling shirt through a pocket.
Johnson, whose No. 99 GAINSCO/Bob Stallings Racing Pontiac Riley finished seventh in the race, flew to Charlotte, N.C., for further evaluation and outpatient treatment with a hand specialist at Carolinas Medical Center.
“That certainly wasn't the way I wanted to end the Rolex race,” Johnson said. “I really appreciate all the hard work by the guys this weekend. I'm just sorry I wasn't there at the end with them. The doctors did a great job in Daytona and Charlotte and I can't thank them enough. Everything feels good and I'll be ready to roll for Daytona.”
The injury will not keep Johnson from driving in the season's first NASCAR Sprint Cup event, the Budweiser Shootout, Feb. 7 at Daytona International Speedway.
Johnson said he will still co-host his Super Skins charity golf tournament and party with Nick Lachey this weekend in Tampa, Fla.