Dover Motorsports officials announced Friday a "definitive agreement" to sell Memphis Motorsports Park to Gulf Coast Entertainment.
Dover Motorsports said it is selling the .75-mile Memphis track and adjoining drag strip for $10 million. Dover Motorsports will receive a two percent stake in Gulf Coast Entertainment and will have an agreement to provide management services to Alabama Motorsports Park.
Gulf Coast is currently building a "multiuse entertainment complex" near Mobile, Ala., with plans to include a .7-mile oval track. A.M.P. has been branded a "Dale Earnhardt Jr." Speedway, as Earnhardt Jr., sister Kelley Earnhardt and brother Kerry Earnhardt all were part of the original investment group.
Alabama Motorsports Park is scheduled to open in 2011.
The news release said Memphis does not anticipate any schedule changes for 2009, when it will host Nationwide and Camping World Truck series races at the track.
And while the track will be owned by Gulf Coast, it will operate under a management agreement with Dover Motorsports. Closing is expected to take place on or about April 30, and is subject to financing and customary closing conditions.

Those of you scoring from home can add two more Daytona 500 entries to your list. And they're a couple of names you might not have expected.

Geoff Bodine is scheduled to drive the No. 64 Gunselman Motorsports Toyota in an attempt to make the field. The 59-year-old Bodine, winner of the 1986 Daytona 500, will be attempting to make his first NASCAR Sprint Cup start since 2004. He will share the car with brother Todd throughout the season. While the team isn't sponsored right now, Gunselman said he has "some key individuals helping us get funding we need to compete on a larger basis." The team hopes to use their on-track exposure to draw attention to Geoff Bodin's efforts with the U.S. Bobsled Team.

One-time Cup Series regular John Andretti will have a guaranteed spot in the season-opening race. He is scheduled to drive the No. 34 Chevrolet fielded through a partnership between Front Row Motorsports and Earnhardt Ganassi Racing. EGR will provide the car, engine and some crew members for the venture. The entry is locked into the Daytona 500 because it will using the points from one of EGR's cars that is not scheduled to run this season (Nos. 01, 15 and 41). Read more here.

You can always count on Jayski to have a Totally Unofficial Daytona 500 entry list. 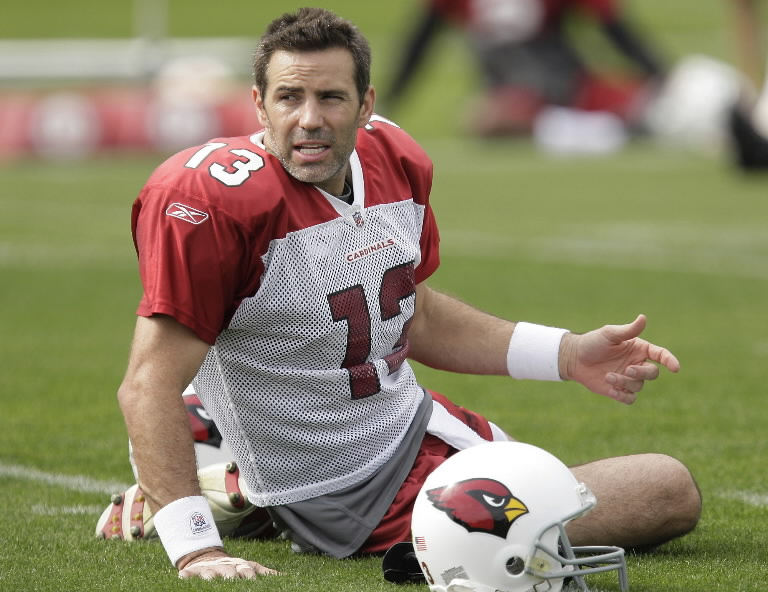 I got a little press release from the fine folks at Toyota the other day with a bunch of Super Bowl predictions for the manufacturer's NASCAR drivers. Many of guys are siding with the Cardinals and all had their reasons, no matter if they were die-hard NFL fans or casual observers.

Sprint Cup rookie Scott Speed based his rooting interest on his only experience watching a live NFL game. “I went to my first NFL game a couple weeks ago when the Panthers played the Cardinals in the playoffs," Speed said.  "The Panthers lost really badly because the Cardinals wide receiver Larry Fitzgerald caught everything that got thrown in the sky!  I’m pulling for the Cardinals to win the Super Bowl, for sure. Fitzgerald is the man -- he has sticky fingers.  I don’t like the Steelers, not for any particular reason, I just don’t like them.  I think they’re bullies!  On Sunday, I’m going to have some friends over to my house to watch the game, so I hope my team can pull off the win!”

Kyle Busch and Micheal Waltrip have a special place in their heart for Cardinals quarterback Kurt Warner, above. "I’m kind of friends with Kurt Warner, so I would really like to see him win," Busch said. "I got to spend some time with him at a Super Bowl party last year in Phoenix when M&M’s had me out there. Kurt came around the room and we talked a little bit, so it would be great to see him do well and the Cardinals win.”
Said Waltrip: “All of my friends are Pittsburgh Steelers fans, so I hope the (Arizona) Cardinals win.  Plus, I love Kurt Warner because he’s old like me -- really not quite like me."

Young Joey Logano apparently didn't grow up in a NFL-crazy house. But he still has a rooting interest in Sunday's game. "I have to admit, I’m not a huge football fan -- I did follow the Redskins a little when Coach Gibbs was there," Logano said.  "It’s tough when you race during most of the football season.  Every year we do get family and friends together to watch it though.  This year I’m pulling for Pittsburgh, they are closer to where I grew up.  And anyway, I have a 50-50 chance of being right.”

Camping World Truck Series champion and Michigan native Johnny Benson knows his football and he likes the Steelers' chances. “I like Pittsburgh.  Their defense is awesome," Benson said.  "Ben Roethlisberger is cool under pressure and does a really good job.  I think the Cardinals are a good team, too, but I just think the Steelers have the upper hand. Pittsburgh made it this far because they're a really good team and their coach does a good job. I'm even trying to get tickets so I can go to the game.” 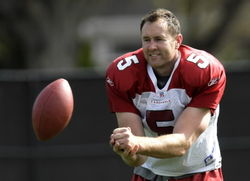 But Marcos Ambrose, a native of Tasmania (an island state that is part of Australia), had the best reason to root for the Cardinals. “I have to go for the Cardinals because of Ben Graham (right), their punter.  He’s Australian,” he said.

Entries for the Texas World Dirt Track Championships continue to fill quickly as nearly 100 competitors already have preregistered for the three-day event set for Feb. 26-28 at the Texas Motor Speedway Dirt Track. The Texas World Dirt Track Championships, one of the largest dirt track events in the nation, is projected to have approximately 300 entries from Limited Modifieds, Modifieds and O’Reilly SUPR Late Models divisions.
Drivers are encouraged to pre-register for the weekend and TMS officials have put an incentive on doing so for this event. Competitors that meet the Feb. 15 pre-entry deadline will have a distinct advantage over those who choose not to pre-register. For drivers that fail to qualify for the feature races, two provisional spots will be added to the rear of the field for each race and they will be randomly selected from the pool of preregistered competitors.

Go here for more information about the event.

Randy Moss Motorsports officially announced its driver lineup on Friday and the NASCAR Camping World Truck Series team chose to go with a good mixture of youth and experience for 2009.

Former Truck Series champion Mike Skinner will drive the No. 46 Toyota for the team and rookie-of-the-year candidate Tayler Malsam will pilot the No. 81 Toyota. The 51-year-old Skinner, who has 25 wins, 80 top-five and 114 top-10 finishes in 10 seasons in the Truck Series, finished sixth in the series standings last season driving the No. 5 Toyota for Bill Davis Racing. Seattle native Malsam, 19, finished ninth overall in the ARCA RE/MAX Series standings last season and made two Truck Series starts in 2008.

Read more here.
Compton, Bliss shore up rides
Also this week, Wyler Racing announced NASCAR veteran Stacy Compton will pilot the team's No. 60 Toyota in 2009. Read more here.
Key Motorsports has hired former Truck Series champion Mike Bliss to drive the No. 40 Chevrolet for at least six races in 2009, starting with the NextEra Energy Resources 250 at Daytona International Speedway on Feb. 13. Read more here.
New rules for the Truck Series
On Thursday, NASCAR handed out some new rules to the Truck Series teams in an effort to curb costs in 2009. The new amendments to the series rule book dictate how many active crew members a team can have at the track, and how many people can service a truck during a pit stop. Teams will also not be able to add fuel and change tires on the same pit stop. Strict new multi-use engine rules were also part of the changes. Read more here.
-- Michele Vincze 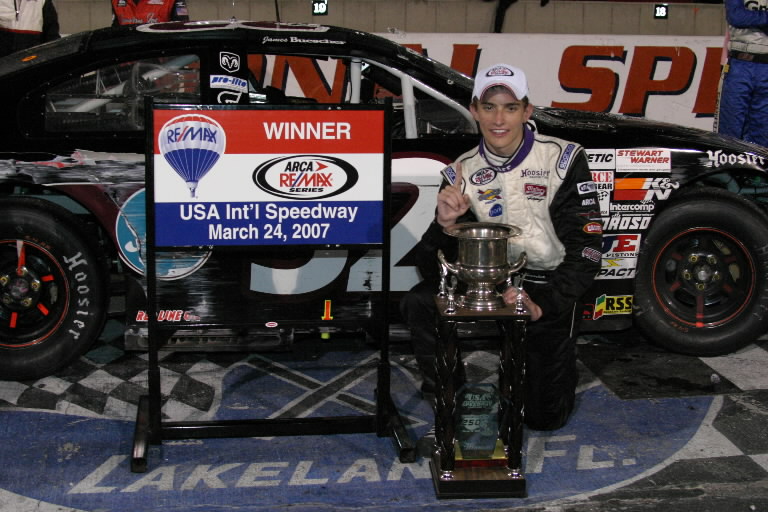 Circle Bar Racing announced Thursday that Plano, Texas, native James Buescher, above, will drive the No. 10 International MaxxForce™ Diesel Ford F-150 for the 2009 NASCAR Camping World Truck Series season. Buescher, 18, will run for rookie-of-the-year honors and will benefit from having 12-year veteran Rick Crawford as a teammate.
Buescher has won national championships in everything from Bandeleros to Legends to Late Models. When he was 16, he became the youngest winner in the ARCA RE/MAX Series when he took the checkered flag at USA International Speedway in Lakeland, Fla. Buescher captured one pole and had one top-10 finish in six NASCAR Nationwide Series starts last season for Braun Racing.
"Circle Bar has its roots in Ozona, Texas, and to have James – a true Texan – represent Circle Bar Racing, International and Ford is special,” Circle Bar Chief Operating Officer Lisa Mitchell said in a release.  “We’re looking for James to learn from Rick, make a strong bid for Rookie of the Year and add to the rich racing heritage my father has established.  Tom Mitchell has prided himself on helping drivers establish themselves in the sport, and we feel Circle Bar Racing can do the same for James.”
Read more here.

The unsteady economy has affected another race team, this time IndyCar's Rahal Letterman Racing. The team revealed Thursday that its 2009 IndyCar season is in jeopardy because it has not found a primary sponsor. Team co-owner Bobby Rahal said they will continue their search for a backer right up until the April 5 season-opener.  Read more here.

Randy Moss Motorsports will switch from Chevrolet to Toyota for 2009 and the team is planning on fielding two trucks in the NASCAR Camping World Truck Series this season. RMM did not announce its driver lineup on Wednesday, but rumors have former Truck Series champ Mike Skinner moving to the team co-owned by New England Patriots receiver Randy Moss.

Also this week, it was announced that Texan David Starr has joined the HT Motorsports team and will drive the No. 24 Toyota with sponsorship from Zachry Holdings Inc., a family-owned company based in San Antonio. Starr, who most recently drove for Red Horse Racing, finished 12th in the Truck Series points standings last season. Starr will be joined at HTM by Terry Cook, who will drive the No. 25 Toyota. Read more here.

The Truck Series season gets underway on Feb. 13 with the running of the NextEra Energy Resources 250 at Daytona International Speedway.