Apparently Monday we could see an announcement about the pending merger between Petty Enterprises and Gillett Evernham Racing. With the merger, GEM would absorb the No. 43 entry made famous by seven-time Cup champion Richard Petty. The Pettys, starting with Lee, have been a part of NASCAR since the sanctioning body was formed 60 years ago. The new GEM stable would feature at least three cars, with Kasey Kahne continuing in the No. 9 Budweiser Dodge, Reed Sorenson taking over the No. 43 Dodge (with sponsorship from the Air Force) and AJ Allmendinger driving the No. 19 entry. Reports are conflicting about the future of the No. 10 Dodge, which has a vacant seat. Check out nascar.comfor several stories about the merger and Petty legacy.

Speedway Motorsports Inc. purchased Kentucky Speedway, clearing the way for SMI owner Bruton Smith to try and bring a coveted NASCAR Sprint Cup race to the 1.5-mile tri-oval in Sparta, Ky.
The deal was finalized Wednesday, more than seven months after SMI agreed to buy the track from the speedway ownership group led by Jerry Carroll. According to papers filed with the Securities and Exchange Commission, Smith agreed to pay $78.3 million for the speedway that cost $152 million to build.
The track joins a growing portfolio for SMI, which owns seven other NASCAR-sanctioned facilities, including Texas Motor Speedway.
The former ownership group filed an antitrust lawsuit in 2005 against NASCAR and International Speedway, alleging they worked together to create an unfair monopoly and prevent Kentucky from securing a Cup race. The lawsuit was dismissed earlier this year but the case is on appeal.
Smith can not be part of the appeal under a settlement in a Texas-related antitrust lawsuit previously filed by an SMI shareholder against NASCAR and ISC. 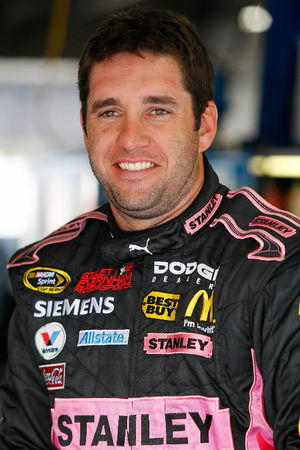 NASCAR's newest hot rumor features the amicable and popular Virginian Elliott Sadler, right. ESPN.com and Sporting News are reporting that Sadler is being replaced in the No. 19 Gillett Evernham Motorsports Dodge by AJ Allmendinger, who was released by Red Bull Racing late in the 2008 season. Allmendinger drove the GEM No. 10 Sprint Cup entry for five races to finish out 2008. Stay tuned, because this blogger thinks there's more to this story.

Richard Petty audiobook due out in February

NASCAR's King has spoken. Richard Petty is releasing an audiobook to coincide with the 25th anniversary of his record 200th career victory.
Stock car racing “is a very popular sport, but every year that goes by, we leave a little bit of our past behind,” Petty said. He added that the audiobook “will help bring our colorful past into public consciousness. This is not just about Richard Petty or Petty Enterprises. This is about the history of a great sport.”
The four-hour, four-disc series is titled Richard Petty's Audio Scrapbook and can be pre-ordered here. On it, Petty is joined by longtime racing announcer Barney Hall, former crew chief Dale Inman and drivers Junior Johnson, David Pearson and Bobby Allison.
“We raced each other hard, sometimes very hard, but we had a great time promoting NASCAR and helping build it into the sport it is today,” Petty said.
Known as “The King,” Petty won seven championships in his 35-year racing career and became just as well known for his trademark shades, cowboy hat, bushy mustache and boots.
His audiobook is scheduled for release in February during the week of the Daytona 500, a race he won seven times. Petty claimed victory No. 200 at one of the other major annual events at Daytona International Speedway, the Firecracker 400 in July 1984.

Just a month removed from his first NASCAR championship, but hampered by the current economic crisis, owner Bill Davis has sold his race team and engine company. Mike Held, a California businessman, and Marty Gaunt, vice president at Bill Davis Racing, bought out the veteran owner. The duo said Monday they've also taken control of profitable Triad Racing Development, which supplies engines, chassis and bodies to customers from all three of NASCAR's top series. Davis, who has been in NASCAR for more than 20 years, won his first championship this season with Johnny Benson in the Truck Series. He also won the Daytona 500 with Ward Burton in 2002. But Davis lost his Sprint Cup Series sponsor and has been unable to secure funding for 2009. Benson also announced before last month's title-clinching finale that he would not return to BDR next season. Read more here.

You can almost see the scene playing out across NASCAR Nation: Bristol season-ticket holders trying to decide whether to renew their tickets for 2009 or save the money for something much more important like a mortgage payment or college tuition. While attending NASCAR races at Bristol Motor Speedway is a treat and sometimes a luxury, life and a bad economy do happen and some Bristol ticket holders didn't renew their tickets, making the once impossible ticket available to us all. Go here to inquire about prices and availability.

Houston native Brad Coleman is returning to Joe Gibbs Racing's Nationwide program to co-drive the No. 20 Toyota with Joey Logano and Denny Hamlin in 2009. Coleman raced part-time for JGR in 2007 before moving to Baker Curb Racing last season. The 20-year-old Coleman, who also made one Sprint Cup start for Hall of Faming racing in 2008, has seven top-10 finishes, three top-five results and one pole in 43 Nationwide starts, 17 with JGR.

Add the Indianapolis Motor Speedway to the list of sports institutions hit by the recession.
Speedway officials have completed their budget review and some positions have already been eliminated, though spokesman Fred Nation did not provide a figure. Speedway officials have also implemented a hiring freeze and acknowledge more jobs could be lost next year if the economy continues to fizzle.
“As time moves forward, there could be more restructuring, depending on the economy,” Nation told The Associated Press on Friday.
Earlier this week, the speedway began making changes as it closed its 45-year-old hotel, the Brickyard Crossing Inn, where some drivers used to stay in May and scenes from Paul Newman's movie “Winning” were shot. That decision cost 15 full-time employees their jobs.